Allerg-STOP Repellent is addressed to those who want to maintain the hygiene of their mattress because although we use it daily it is not washable. However, it is especially necessary for people with allergies, respiratory problems, rhinitis, psoriasis, bronchial asthma, acareodermatitis, parasitic dermatitis, atopic eczema in children, pruritus ani, conjunctivitis, etc.

Allerg-STOP Repellent is a product that can be applied to the crib, the stroller and the plush doll of a newborn,  and up to the mattress of the bedridden elderly as it is suitable for all fibrous surfaces.

It is an approved and certified product with an international PULIRE award in the quality of life category as well as dermatologically tested by Original Dermatest rated with excellent.

Allerg-STOP is the only repellent biocidal product that neutralizes allergenic loads from feces and dead carcasses of mites, animal hair, plant pollen and mold spores, by doing proteolysis on the proteins composing the allergens, imitating nature, that is, like our stomachs does to food, as the pure geraniol Allerg-STOP contains breaks down the structure of allergens rendering them inactive to our immune system. Geraniol is active for a very long time (up to six months) due to the high boiling point of geraniol (230ο). This mechanism is a global patent of Allerg-STOP and has won the 1st place PULIRE innovation award, in the category Cleaning-Quality of Life.

Anti-Allergic Protection Has A Name

The microsplitter technology in concert with the plant derived geraniol’s effect neutralizes all airborne allergens.

Effect that lasts for 4 - 6 months 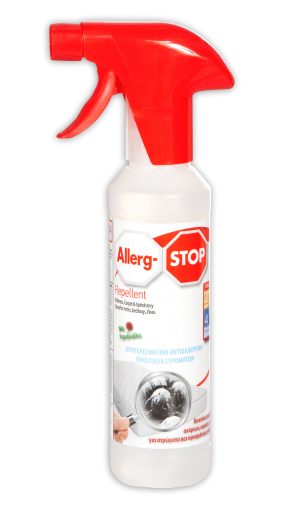 Allerg-STOP has no environmental impact so it does not bear any danger signs pertaining to marine organisms, flora or fauna.

Allerg-STOP Repellent is a unique product that is also used to combat bed bugs, fleas, moths as geraniol also acts as an insect repellent when applied on pillows, cots, plush toys, carpets, rugs, sofas as well as all fibrous and textile surfaces.

Spray with Allerg-STOP Repellent from a distance of 20-30 cm directly on mattresses, pillows, plush toys, carpets, rugs, furniture upholstery, air conditioning filters, car upholstery and on all fibrous surfaces in a well-ventilated area. For the best possible result, make sure that each subsequent spray covers part of the previous one. Apply on all sides of the mattress, pillows and generally all fabric surfaces and let them dry for 2-3 hours with open windows before using them.

The term “allergy” first appears in the medical journal Münchener Medizinische Wochenschrift, on July 24, 1906, as “specially modified reactivity of the organism”, in the article by the Viennese pediatrician Baron Clemens von Pirke. It comes from the Greek words άλλο (different) and έργο (activity). The terms “allergy” and “anaphylaxis” were coined after the emergence of a strange disease that affected up to fifty percent of children vaccinated against diphtheria in the late 19th century, and the disease was called “serum sickness.” . Clemens von Pirke was the first to realize that sometimes the human body reacts to harmless substances, such as dust, pollen or certain foods, in an unusual way, which it perceives as enemies and therefore produces antibodies against them.

The Mechanism of Allergies

Allergy is not the disease itself: it is a mechanism that leads to morbid conditions. In particular, allergy is a type I hypersensitivity reaction, in which the main protagonists are specific blood cells (basophils and mast cells) and a specific type of antibody (immunoglobulin E). Allergens enter the body through respiration, through skin contact, through food or injections. When the body comes in contact with a foreign substance, which acts as an allergen, its immune system activates the defense mechanisms of chemical and cellular immunity, in order to neutralize the antigen. Thus, in very simple words, the first time the body encounters the allergen, the factor immunoglobulin E will be sensitized, which will end up in specific receptors on the basophils and mast cells. The second (third, etc.) time the body encounters the same allergen, then immunoglobulin E will recognize the allergen and join it, resulting in the activation of basophils and mast cells. Activated basophils and mast cells will then release various stored substances (eg histamine), which in turn will cause a rapid inflammatory reaction, which will lead to conditions such as anaphylaxis, urticaria, angioedema, allergic rhinoplasty, Allergic asthma, oronosis, allergic vasculitis, hypersensitivity pneumonitis, atopic dermatitis (eczema), contact dermatitis and granulomatous reactions. Allergies can occur in any organ. But more common in the skin and mucous membranes, as they represent the barrier between the body and the environment.

Allergic conditions affect the lives of more than one billion people worldwide. With their increase, over the last sixty years, their effects are expected to affect up to four billion people by 2050. Due to the extremely large number of the afflicted, the general population is facing huge direct and indirect costs, with major effects on the macroeconomy, related to health care, productivity losses, patient absences from work, and quality of life.

The most common causes of allergies from the environment come from our contact with the following four basic airborne allergens.

It is the most common source of indoor allergens, whose feces and dead bodies have a very high content of four basic allergens, which all cause the production of antibodies related especially to asthma. These are found in household dust, mattresses, blankets, furniture, carpets and curtains. The dust mites are nourished by discarded skin epithelium and grow well in humid and hot environments.

The main allergens are proteins secreted by glands in the skin of animals and discarded with the epithelium, as well as proteins in saliva, which stick to their hair when animals lick themselves.

Plant pollen allergies are due to two main allergens, which are associated with the symptoms of allergic rhinitis.

Fungal allergies, especially from mold spores that grow in areas with high temperature, humidity and low sun exposure, have a particular effect on the lower respiratory tract and are associated with the symptoms of pneumonitis.

Allerg-STOP is an innovative product, created to neutralize allergens from residential and public areas as, in recent years, due to astyphilia and air pollution, new conditions have been created that have contributed to the excessive increase in allergens as well as an outbreak of allergies. It was originally made with active papaya enzymes, which are similar to stomach digestive fluids, that break down allergens as the stomach does to food. Despite its excellent effect, it had the disadvantage of a short duration of effect after its application and, in places with constant allergen load, it had to be applied at regular intervals. We developed the product with the aim of adding a longer duration of effect and a wider field of use. We created a new product with geraniol for active substance and patented microsplitter technology.

Allerg-STOP is the only repellent biocidal product that neutralizes allergenic loads from feces and dead carcasses of mites, animal hair, pollen from plants and mold spores, by doing proteolysis on the proteins composing the allergens, imitating nature, that is, like our stomachs does to food, as the pure geraniol Allerg-STOP contains breaks down the structure of allergens rendering them inactive to our immune system. Geraniol is active for a very long time (up to six months) due to the high boiling point of geraniol (230ο). This mechanism is a global patent of Allerg-STOP and has won the 1st place PULIRE innovation award, in the category Cleaning-Quality of Life.

In addition, it effectively repels bed bugs and fleas and controls mite colonies due to the repellent property of geraniol itself.

Allerg-STOP contains only active geraniol, in its purest form, without admixture with citronella or other excipients, and does not contain insecticide or any other active substance.

We apply Allerg-STOP in places and objects where we have a high concentration of allergens. The object with the greatest load is the mattress where we sleep because, due to exfoliation (a normal process of our body), it is burdened with 2kg to 3kg of discarded skin epithelium, the main food of mites, resulting in the mites creating overcrowding colonies and becoming a major source of allergens. Other items with significant load are furniture, carpets, curtains, baby strollers, pillows, air conditioning filters, plush toys, etc.

Subscribe to our newsletter so you can receive news and updates of the products.